WARNING! These reviews all contain SPOILERS!!!! 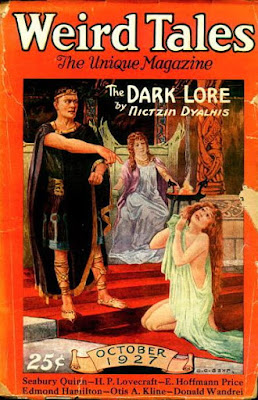 Our unnamed narrator is apparently having drinks with a pal, and is just a wee bit defensive about the fact that he's nervous as hell and won't go down into subways or cellars ever again.

Much of his newfound nervousness seems to have something to do with local artists Richard Upton Pickman, a controversial guy who's managed to alienate most of the local art community with his paintings, which are considered brilliant, but whose subject matter - ghoulish creatures doing ghoulish things - has become untenable with the crowd.  There's also more than a few odd things about Pickman himself - accusations that he's somehow starting to resemble his own subject matter.  And now, it seems, Pickman has vanished, and Our Narrator neither knows, nor cares, what's happened to him.

It seems not long ago, Our Narrator had developed a friendship with Pickman, who one night invited him to his private studio, a broken-down hovel in a forgotten slum of Boston, where the houses date back to the town's founding.  Pickman talks of tunnels under the city and secret rooms and wells in the cellars of the old houses which lead to dark, occult secrets.

There, O.N. is shown paintings too disturbing in subject matter and execution, to ever be shown to the general public.  While looking at an especially nasty work-in-progress, Pickman steps away to deal with some odd noises coming out of a well in the cellar, which he claims are made by large rats.  To O.N.'s surprise, he pulls a revolver and apparently fires it at something in the well, possibly killing it.  They head back to Pickman's home.

Some time later, O.N. makes a discovery.  He pocketed a small, curled-up piece of paper that was tacked to the painting Pickman was working on in the cellar, which Pickman had alleged was a photograph of a part of the city he intended to use as a background for the painting.  Upon examining the paper, O.N. sees that it is no such thing - it is in fact a picture of the monster he has been painting - but not a photo of a drawing or portrait - an actual photograph of the living creature.

This was one of the first Lovecraft stories I ever read, not too long after seeing the adaptation on Night Gallery.  As a kid who loved art, the idea of a painter who depicted monsters with frighteningly realistic technique was exciting, and I think that part of what comes through in this tale is the very reason some us fall so hard for HPL, especially when we're teens, because, at root - HPL was a weird as we are!

What you can see him doing in this tale is struggling to define an aesthetic, if you will, of weird-fantasy-horror art - "Any magazine-cover hack can splash paint around wildly and call it a nightmare or a Witches’ Sabbath or a portrait of the devil, but only a great painter can make such a thing really scare or ring true. That’s because only a real artist knows the actual anatomy of the terrible or the physiology of fear—the exact sort of lines and proportions that connect up with latent instincts or hereditary memories of fright, and the proper colour contrasts and lighting effects to stir the dormant sense of strangeness. I don’t have to tell you why a Fuseli really brings a shiver while a cheap ghost-story frontispiece merely makes us laugh. There’s something those fellows catch—beyond life—that they’re able to make us catch for a second. Doré had it. Sime has it. Angarola of Chicago has it..." the narrator tells us.

All of this is saying, Lovecraft imagined for himself, in Richard Upton Pickman, the greatest fantasy-horror artist of all time.  And if he'd been real, HPL would've hung his pics in his living room.

I love this story.  Always have and still do.  There's plenty of buildup, but, as in the best Lovecraft, its craftily orchestrated.  When Pickman rhapsodizes about the sinister, secret history of the old Boston neighborhood... " There’s hardly a month that you don’t read of workmen finding bricked-up arches and wells leading nowhere in this or that old place as it comes down ...There were witches and what their spells summoned; pirates and what they brought in from the sea..." you can feel the thrill of the chill running up your spine. 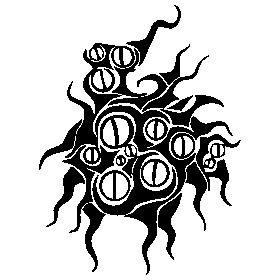